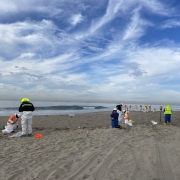 It feels like I’ve been grounded…literally…from surfing. I’m not 15 years old, I didn’t get too sassy nor did I break curfew. But this feels like punishment for something I didn’t do and like my teenager self, I’m protesting the “parents” in this situation—big oil.

Since Saturday, October 2, an oil pipeline was punctured and has been gushing more than 126,000 gallons of crude oil through a pipeline’s 13-inch gash into the Pacific Ocean about 4 miles off the coast of Huntington Beach and Long Beach, according to news reports. However, some boaters reported smelling something in the water on Friday, October 1. The rig responsible is called the Elly rig, owned by Amplify Energy, which is based in Houston, Texas. 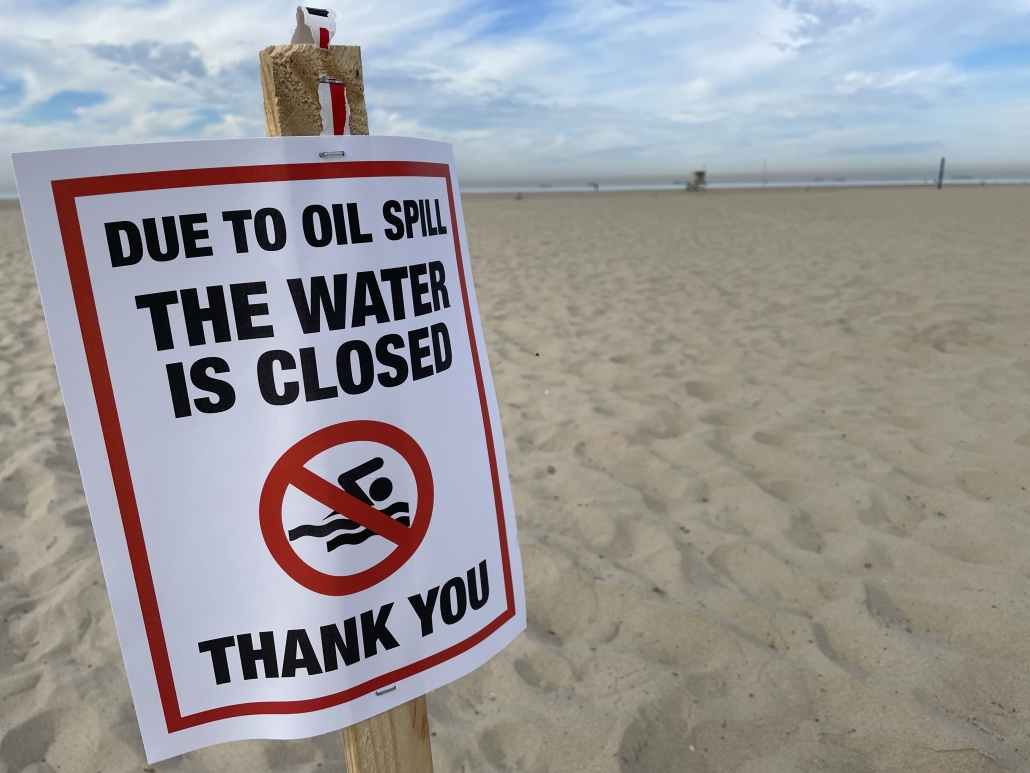 Officials indicated that the pipeline was moved more than 100 feet across the ocean floor, which possibly suggests a ships anchor may have punctured the pipeline spilling hundreds of thousands of gallons of crude oil into the ocean, killing wildlife and soaking the coastline in tar and filth. Cleanup crews from California Fish and Wildlife and independent contractors (which I will add are hired by the oil companies) have been working for the past two weeks to clean up the spill. Ironically and it should be noted that those departments are working together—California Fish and Wildlife and the U.S. Coast Guard are sharing an office in Long Beach with Amplify Energy—a company that is now under criminal investigation, according to the Orange County Register.

Amplify and the U.S. Coast Guard did not return my phone calls, texts or emails. California Fish and Wildlife referred me to the press conferences.

After a week of beach closures and many still remain closed, Huntington and Newport Beaches are allowing people to enjoy the sand, but not the shoreline or the water. Newport Harbor, Corona Del Mar, Laguna Beach and Dana Point Harbor are fully closed.

“Our beaches are largely unaffected south of the Newport Pier,” said Brad Avery, Mayor of Newport Beach.  “We do have oil on our beaches from the pier to the Santa Ana River Jetty…it’s by no means a disaster.” 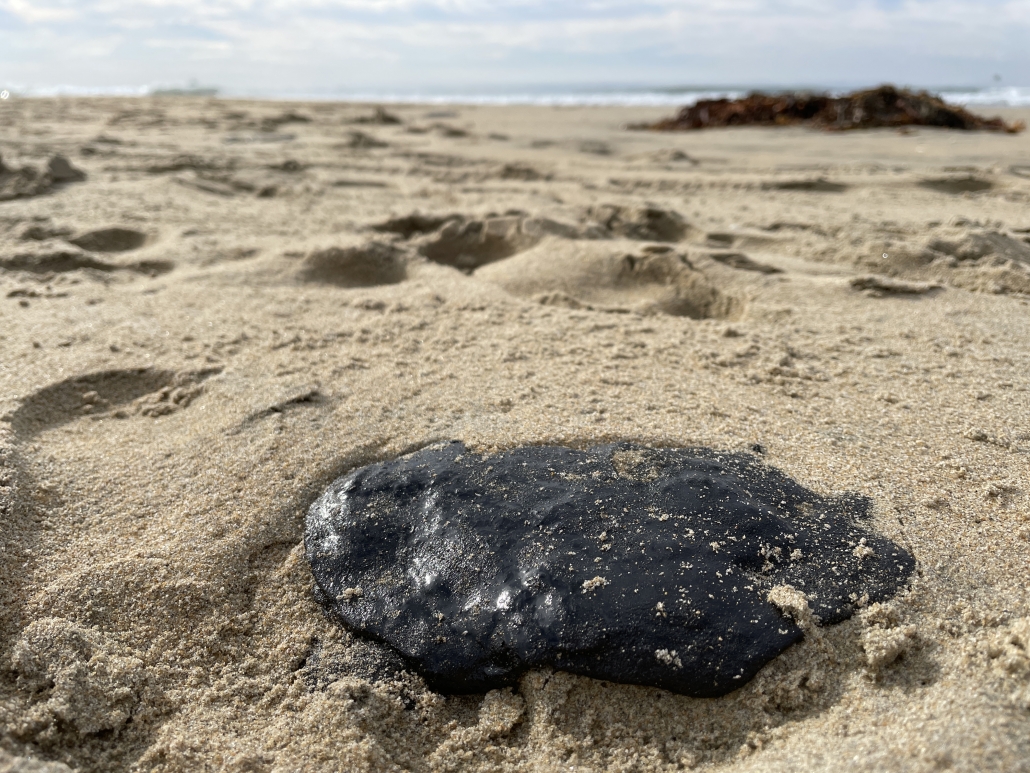 A tar ball about the size of Swedish pancake and a pretty darn thick one, too.

According to California Fish and Wildlife’s Southern California Spill Response, 1,500 people will be helping the already 400 crewmembers in the cleanup response by the end of the week and the team has so far recovered 5,544 gallons of crude oil from Huntington Beach and south to San Diego. Additionally, 13.5 barrels of tar were recovered, 232,500 pounds of oil debris has been removed from shorelines and more than 11,000 feet of containment boom has been deployed.

“The Huntington Beach oil spill is a fateful reminder that oil does not belong on our coasts,” said Matt Sylvester, Orange County Coastkeeper communications director. “This is not the first California spill, nor will it be the last unless we move quickly to decommission oil rigs and halt all future oil contracts.”

Beaches are set to reopen when the water quality levels detect no toxins associated with the oil in the water, said an AP News report.

A 2017 study about the Keystone Pipeline conducted by Auburn University states that crude oil is made up of petroleum, mineral salts, sand and more 1,000 chemicals, like benzene, which are hazardous to humans when inhaled or touched. In their study, they noted that Ponca City, Oklahoma residents experienced an increase in health hazards once the pipeline was extended into their city, including young children who lived near the pipeline were 56 % more likely to develop leukemia.

Not only is the tar now in the Pacific off the coast and on the sands, exposure to these toxic chemicals can cause migraines, painful rashes, breathing complications, nausea, chemical sensitivities, and exacerbated cancer activity—in a word, don’t touch it. If you do touch it, here’s how to remove it, and remove it quickly! 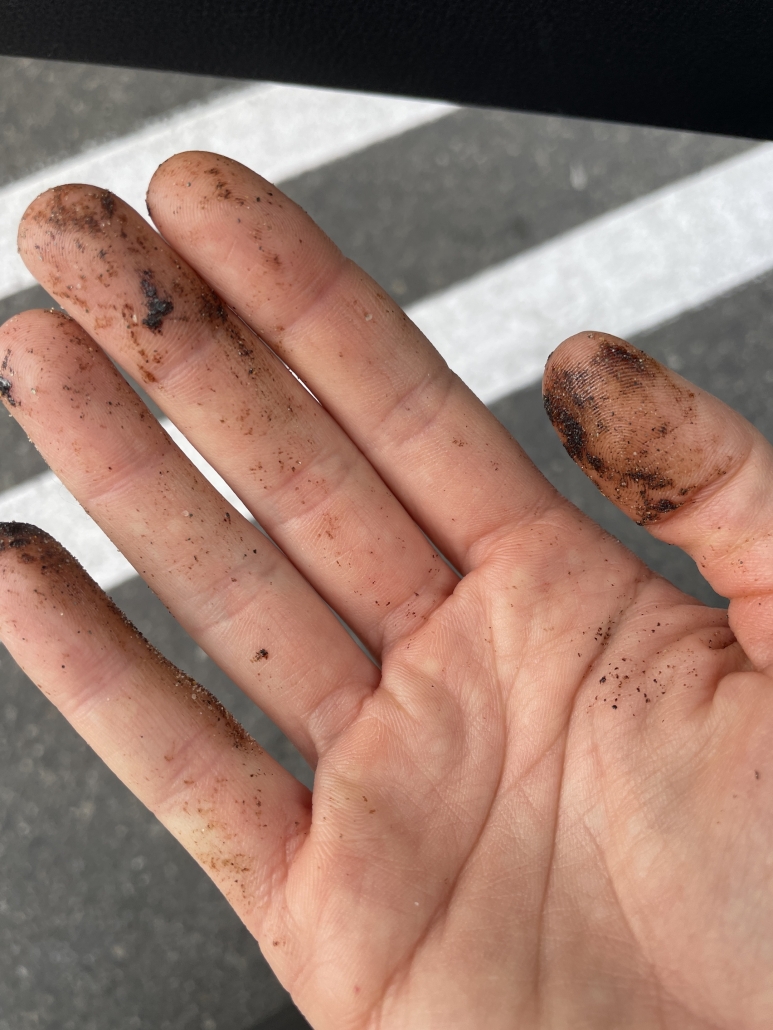 What’s more, according to the same study, tar sand sinks into the water supply and that makes cleanup even more complicated, not to mention the slew of health hazards that come with a tainted water supply. Though this spill’s magnitude was not as great as several in the past, (see: Deepwater Horizon), this is an industry who’s consistent shady backdoor practices, deep pockets and faulty equipment, failure to notify the proper authorities, needs to be brought to the surface and removed from environments because our ecosystem, be it California, the Gulf and basically any ocean, land, river, … can’t and shouldn’t take much more.

“Laguna Ocean Foundation works to protect the beaches, tidepools, estuaries of our local coast and to share the wonder of those resources with the public. Harm to those resources of any kind, is a loss to us all,” said Claire Arre, Laguna Beach Ocean Foundation education and outreach coordinator. “An oil spill with the magnitude of last week’s pipeline ruptures off of Huntington Beach can devastate our coastal ecosystems in an instant. We have held our breath as our kelp forests and tidepools, our go-to snorkel and surfing spots, truly all our favorite treasures were threatened. We are thankful for the good news of minimal nearshore impact here in Laguna Beach, and hope that all of Orange County will be able to recover from this. We love our beaches and we never want this to happen again.” 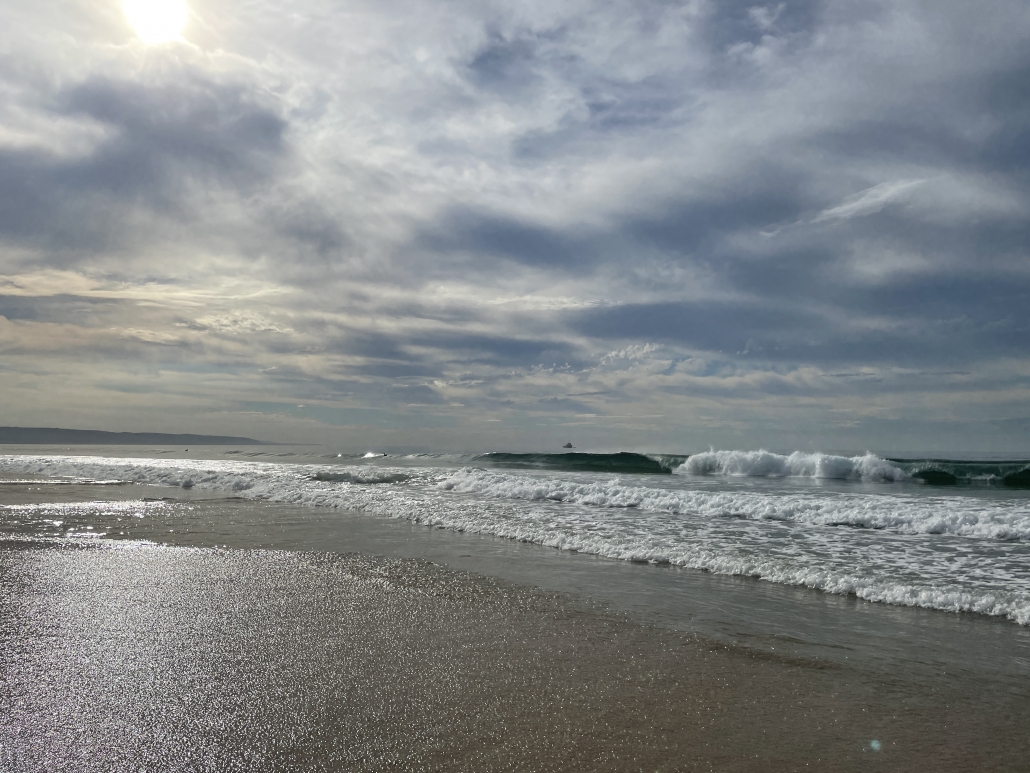 Though it looks like that barrel is going to open up, it’s closed for you thanks to Amplify Energy.

Though networks are inundated with volunteers (a great problem to have!), it never hurts to find out how you can donate or get involved, too:

Until we get the green light, this is one grounding I will be taking seriously. 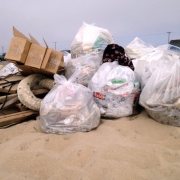 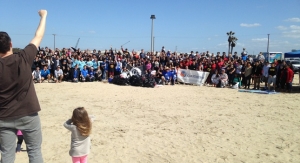 After more than 10,000 pounds of trash picked up through 67 total beach cleanups so far, Coastal Playground Owner and Founder Andrew Sneddon is far from calling it quits.

“So far in Huntington [Beach], we’ve been able to achieve some amazing results with our consistent monthly cleanups,” said Sneddon. “With three additional cleanups in Seal Beach, South Orange County and Oahu, Hawaii, we will be able to amplify our message considerably.”

Coastal Playground is an ocean-enthusiast clothing and lifestyle company who works alongside non-profit organizations such as Orange County Coastkeeper. Focused on educating the public about the importance of clean beaches and environmental sustainability, Coastal Playground donates 50 percent of their proceeds towards keeping our beaches trash-free and they want to continue the push for three more cleanups in one month.

During the team’s latest event on Saturday May 14th at Huntington Beach’s Brookhurst street, over 500 volunteers of all ages picked up about 475 pounds of trash within 1 hour and 45 minutes. The windy morning weather didn’t put a damper on anyone’s spirit as people collected trash of all shapes and sizes. Plastic debris smaller than a pencil eraser to large metal structures burrowed in the sand were dug out and added to the growing pile of trash. Between all of the volunteers, collecting litter became much like an Easter egg hunt–a good problem to have!

And let’s not forget saving a few of those Tuna Crabs in between trash-hunting at the shoreline! :) 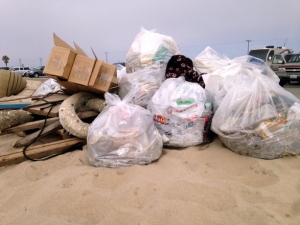 “With three additional monthly beach cleanups, we will not only be able to pick up three times the amount of trash, but we will also reach thousands more people with our project,” said Sneddon. “This creates an army of ocean protectors!”

As surfers, we often notice our fair share of trash on the beach or even floating out beyond the breaks. However, most of the litter seen burrowed in the sand or found by a creek bed does not come from beachgoers.

“60-80 percent of the pollution that we find on our coastal waters and beaches actually originates 40-60 miles away, so that can come from places all the way as far as Riverside all across Orange County,” said Director of Clean Up OC Julia Williams.

Remember that high school chem class? Pollution basically comes in all forms-from solids to liquids as well as gas. Although it is not impossible for a regular Joe or Jane to actively reduce pollutants in gas and liquid form (see ‘hybrid vehicle’), it is entirely possible that while walking to the shoreline, Joe or Jane might pick up a few items and toss them in a nearby trashcan.

Not only are solid wastes like plastic, styrofoam and aluminum foil hurting our marine life, these items also like to wear out their welcome in our natural environment. Common things like a plastic bottle take 450 years to decompose, according to the Department of Economic Security.

Give back to your local beaches and help keep them clean! For more information about how to get involved in your local Orange County Coastkeeper cleanup, click here.