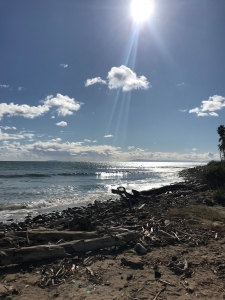 Looking  small but quite regal, your highness.

On the border of Santa Barbara and Ventura counties sits Rincon, “Queen of the Coast.” Rincon, the Spanish word for “angle” or “corner,” is one of the most famous right points in California, if not the world for producing 300-yard rides, assuming you can navigate your line through the heavy crowd and its sections. To its north, Santa Barbara surfers are blocked by the Channel Islands overshadowing, which often brings those folks AND the kitchen sink into the lineup. Rincon is best during a low tide and west/northwest swells.  When all cylinders are firing over the cobblestone bottom, this monarch can be very democratic as she tends to share the wealth via multiple points of interest—first, second and third, to be exact. If you are regular-footed or like riding backside, you’re stoked. According to Surfline, your three points to consider are:

The Indicator—the farthest north peak and slowest wave of the trio, lots of longboards, where the “big boys” surf

The Rivermouth—unpredictable, sometimes polluted and very hollow section linking Indicator to the Cove, often a closeout, an alternative to the other overcrowded peaks…either play nice with the crowd or roll the dice

Nicknames: Queen of the Coast