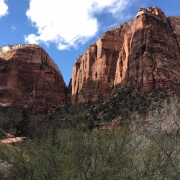 And it just so happened that minutes after I gushed to my boss about wanting to do a solo camping trip, my co-worker messaged the team saying that he had an extra camp site at Zion National Park. Instantly, I responded with “mine…please.” 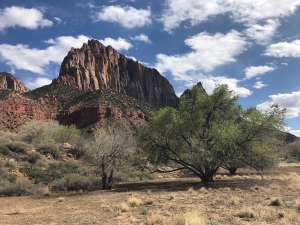 It has been 10 years since I’ve camped by myself…Big Sur in 2009, right around the same time of year, was the first and last time I had pitched a tent, lit a fire and truly struck out into a space with zero cell phone reception. I toggled with the idea of bringing someone along, but my mind immediately screamed: NOPE. There were times where I’d view the estimated air temps for that week and it mostly read in the mid 50’s for the high and the upper 20’s for the low. Again: still going.

I got yelled at by both parents and most co-workers were in disbelief.

Of course I began to question myself: Could I still light my own camp fire? Build my own tent? Cook my own food? Protect myself from predators in and out of the park? YES. 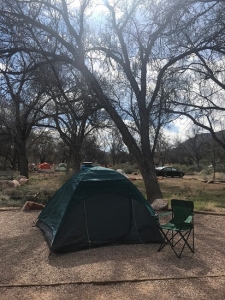 The first time this tent has seen the light in five years. Sad, but true.

After staying Thursday night at the disgusting Rio resort/hotel in Vegas, I powered through Sin City’s dust, desert and debauchery for a couple more hours to Zion and arrived (after many photo stops) Friday afternoon. I could not wait to escape that blasted hotel room that reeked of smoke. Despite it’s salacious  party-hardy reputation, Vegas has never been interesting to me. In fact, it makes me want to run far far away every time. Funny enough–I got more bug bites in the hotel room than I did camping.

When I arrived to my campsite, the beautiful landscape jutted towards puffy white clouds that swiftly blew past the peaks of the park’s beautiful precipices. I was in utter shock and awe having done zero research (naturally) before my solo adventure outside of consistently bugging my co-worker for info. I immediately began to set up my more than 10 year old tent–it’s previous adventure was five years ago in Baja with six wave-hungry boys and myself. The Baja dust and dried mud still sifted around the tent’s interior and, as I opened it up, I let out a big “AWWWWE” remembering that epic surf trip five years ago while, in the same breath, scoffing in shame as it was the last adventure this tent had seen.

After the tent was set up, my co-worker and his wife stopped by to say hello. I also got to know my fellow semi-solo female camper neighbor, who helped me pull up my tent. I later spied her chopping firewood with an ax, which made me feel oddly proud that I asked for her help. Shortly after the set-up, I hopped onto a free shuttle that takes people into the park. I decided to check out the Upper Emerald Pool Trail, a small half-mile trip to a water fall, stocked with crowds, kids and strollers. YAY. So after the brief stroll, I made my way down Sand Bench trail, which had no one. As the sun started to set, I turned around and headed towards camp, where I successfully lit a camp fire and cooked freeze-dried soup and paired it with a salad I picked up from the grocery store earlier.

The night came quickly and after my fire died, I huddled in my tent equipped with quilts, two sleeping bags, beanies, gloves and a solid book. But, I never sleep well when it comes to camping. I woke up at 3-ish a.m to the distant sound of coyotes barking. As I stirred in my sleeping bags, the frigid air felt numb against my face and proceeded to sneak through any available crevice.
In short: brrrr 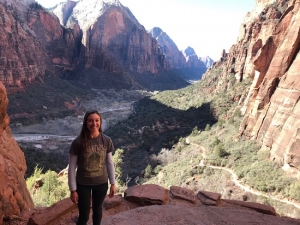 The first portion of the Angel’s Landing hike, right before you get to Refrigerator Canyon.

My 7 a.m. wake-up proved even more difficult than sleeping as getting out of the warmth of my sleeping bags was especially challenging.

Wellll, I’m up! Time for breakfast and the infamous Angel’s Landing hike. No big deal, I thought, as I scarfed my oatmeal and green tea. I will do as much as I can and there’s zero pressure, despite my dizzying fear of heights. But–I often push through because am also very stubborn and goal-oriented. I knew I had to do the hike that has a reputation for treachery. Six people have died attempting the last half-mile and the park makes sure people are aware of that and recommends anyone with heart or lung problems and anyone afraid of heights to not attempt. Of course, I had to at least SEE this beast of a climb. 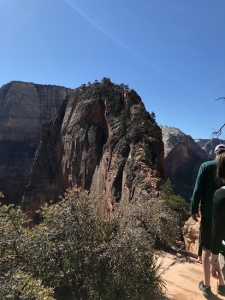 The first 2 miles of the Angel’s Landing follow along a paved road of the West Rim Trail and I will mention, you really start to feel the 1,500 elevation gain towards the top of the longer switchbacks. Try not to get too dizzy because it might not be the highest point of the trail, but it’s still a long way down. After this portion, you come to the only shaded part of the trail known as “Refrigerator Canyon,” which has a small creek and hanging plants and trees. I recommend doing some calve stretching because shortly after this section, you arrive at “Walter’s Wiggles,” which are 21 switchbacks named after the park’s first superintendent. This, outside of the climb, is the most difficult part of the trail as it will wear you down.

If you make it through Walter’s Wiggles, you come to what looks like the top, but no. It is merely a resting/lunching place before you (or should you) take on the last half-mile of Angel’s Landing known as “The Spine”–duly noted for it’s narrow shape and sheer drop-offs. When I tackled this part, there was a hefty line of people (somehow) going both ways on the very narrow path that is, YES, mostly lined with chains for grip. I stood in line and the first third of the half mile climb (not really hike), was what I thought to be the peak, but no–my mouth agape as the rest of the “spine” came into view.

I thought, well I’ve come this far, and it wasn’t as bad as I thought, maybe I’ll just keep going. 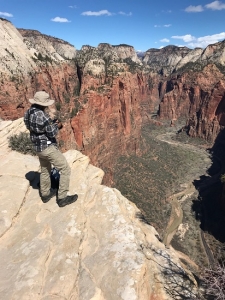 Thank you for being my model, fellow photog, because I really didn’t want to take a selfie. No fear at the peak of Angel’s Landing.

A small part of my stomach was doing loop-de-loops as I climbed up and down, over and out very VERY carefully. One step in the wrong direction, one trip over a jagged rock and you fall to certain death thousands of dizzying feet below. The people in front and behind me became my best friends as I climbed with an 15 extra pounds on my back. I think I would’ve felt a little safer without my 15-pound backpack, but I wouldn’t have been able to eat my delicious turkey avocado sandwich at 5,790 feet. No, I wasn’t having that.

So, I committed to the rest of The Spine and eventually made it to a very unobstructed 360-degree view of Zion National Park. As  I got to the peak, my heart bursted with excitement and fear all at once. I dare not test my balance coupled with my tired legs and quickly found a lunch spot. My turkey and avocado sandwich never tasted so good. I sat for a moment, took in the beauty that is Zion and then decided to go back down since it was, at this point, past noon. I felt the sun fry my cheeks as I carefully stood up to hike down. Despite the fact that I was still shaking in my hiking boots, I was so proud that I made it to this place and didn’t give up. 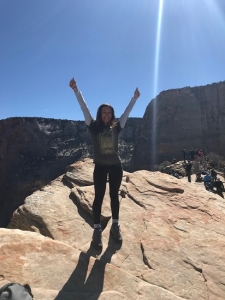 Not too close to the edge. Yay, conquering fears!

The climb back down, however, felt scarier than climbing up. For you climbers/hikers: capitalize on SQUATS because you gonna need ’em. No matter how much my thighs trembled, I forced myself to keep moving despite my semi-lighter backpack falling around my shoulders with each steep descend. At the Spine’s final third portion, there were some rude people who decided to not wait for oncoming traffic on the narrow one-way ridge, and some other folks had to literally grab me and hold me so those rude people would not push me over the edge. I am very grateful for those who were keeping me and the two girls behind safe.

Once I got to the resting space, I felt a wave of relief wash over me as my thighs continued to tremble.

I did it, I thought. I fucking did that shit.

As cheesy as this might sound, a special feeling remained in me for the rest of the day. I couldn’t wipe the smile off my face as I continued to hike more of the West Rim Trail, Weeping Rock and a small portion of the Narrows. I absolutely HAVE to come back here–no question in mind.

My only real question that remains is: will I attempt Angel’s Landing again? Maybe or maybe not, but, not gonna lie: hang gliding, sky diving, rock climbing…these activities have a little more potential for future fear conquering.