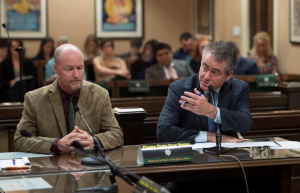 Dr. Chris Lowe provides expert testimony on the need for monitoring and a beach safety program as white shark populations increase along the California coast

Lowe spoke this morning to the committee supporting investment in research into growing white shark populations along California’s coast.

“For the last 10 to 15 years, we’ve seen an increase in the number of white sharks. We believe this comeback is connected to environmental protections that were established several decades ago,” Lowe said. “The good news is that they are coming back. The tricky part is that we lack the tools to monitor them.”

O’Donnell, who introduced Lowe to the committee, noted that record numbers of shark sightings during 2017 had overextended the Shark Lab’s resources.

“The numbers of sharks at our beaches were so high that Shark Lab researchers ran out of shark tags,” O’Donnell said. “We must be willing to invest in those who are doing the work. This is a human, environmental and economic issue.”

“We are seeing unprecedented numbers of juvenile white sharks hanging out in the surf line alongside swimmers, surfers, paddle boarders and others who recreate in the ocean,” Lowe said. “This is prompting more sightings, warnings and closures at local beaches than in recent memory. While this is alarming for beachgoers, this influx – coupled with better technology – is a perfect opportunity for us to find out why these sharks are staying closer to shore for longer periods as they grow bigger. Unfortunately, we don’t have the funding to keep pace with the demand for tags and monitoring. This is jeopardizing our efforts to learn about white shark behavior and help lifeguards and law enforcement better inform the public about beach safety.”

“As a parent and a teacher, our kids’ safety is my highest priority,” O’Donnell said. “The bill – Assembly Bill 2191 – is about learning how to enjoy our ocean and beaches safely and responsibly alongside the growing presence and variety of marine animals along our coast.”

O’Donnell introduced this measure in collaboration with Long Beach State University’s renowned Shark Lab, which has been on campus since 1966. He also recently partnered with the Shark Lab to hold “Shark Day,” a public informational event at the campus. The event highlighted the Shark Lab’s work monitoring and studying sharks, which would be eligible for funding through AB 2191.