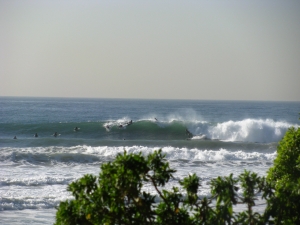 You have arrived to Orange County’s most northerly beach city that is Seal Beach. Although it’s not the first place that comes to the public’s general mind when a swell fires, it has it’s days just like any other beach town on any northwest or south swell. From a playful wave at Ray Bay that sits in front of the San Gabriel river mouth to the Seal Beach Pier’s  “pier bowls” for the more experienced crowd, just like most of our beach cities, this town has it all. When there’s a heavy rain, it is MORE than wise to stay out of the water. There is a reason why Ray Bay has its name: the nearby Edison Plant warms the water temperatures and therefore attracts tons of sting rays. Practice that shuffle!!

When huge walls march through Huntington Beach, like Newport, Seal Beach tends to clean up the shape and tamper down the size. Although it is often considered a ‘windy tunnel,’ it is one of the few places that are protected from winds out of the northwest.

What the Locals say:

“It’s a pretty mellow break, but there are locals that will fling a board at you and sink their fin into the side of your board…if not your HEAD! There are those ‘old dudes’ that want their local beach to be ‘locals only’…even though the surf stinks, unless it’s big swell during winter. If you’ve never surfed Seal, I would stay toward the outer regions, away from the pier. But the surf is shitty 98% of the time. If you shortboard=HB,  longboard=San Clemente area.”
–Mario Serj, Seal Beach local

Highlights: wedgey peaks, summertime surf, shopping and dining, quaint beach houses, rub elbows with Snoop’s hometown of Long Beach before you jet to the ‘bu….but that’s a whole other story.

wedgey peaks, summertime surf, shopping and dining, quaint beach houses, rub elbows with Snoop’s hometown of Long Beach before you jet to the ‘bu....but that’s a whole other story.