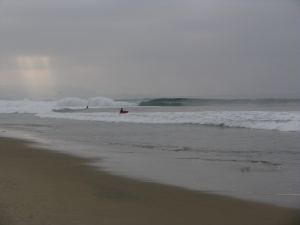 When it fires, Newport doesn’t mess around.

Among the old and new money crowd, fake tits, yacht clubs and fine dining rests a sliver of coast that has some of the best sandy beach break barrels around. From Wedge’s infamous death caverns to Newport Pier/Blackies semi-hollow faces showcasing the biggest hot dogs on retro logs to the Santa Ana River Jetties’ hodgepodge shifty peaks, there is something for everyone. Ironically, it takes a bit more swell power to push through the often over-shadowed arena due to the lovely Catalina Island that sits almost directly off-shore 26 miles away.

When Huntington is double-overhead, expect Newport to be about six feet, unless, on the rare occasion, a steeply angled west or south swell pushes through. If there’s been enough rain to break up the sandbars around the jetties and Santa Ana rivermouth, you are one stoked trust fund baby. Just make sure to proceed with caution if you surf River Jetties. Although the barrels are super tempting right after a rain storm, it’s also a great way to contract a garden variety of staph infections medical science has yet to discover. But once you slide into one of those barrels, you’ll soon understand the fuss. Newport can fire harder than Donald Trump. 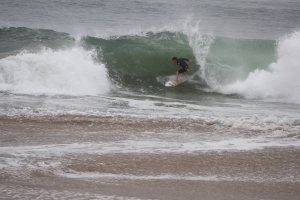 Ouch. Surfer at Wedge about to eat his breakfast…in sand and sea water.

“If you learn how to surf in Newport, you can surf everywhere because Newport is a wedgy faster wave. With west/north west swells, you get Blackies breaking. You’ve got a lot of options with the jetties too. My personal favorite wave is River Jetties because it’s consistent and peaky, so you can avoid the crowd if you want.”
–Dave “Crappy” Campbell, Newport Beach local

“Before the rock jetties were put in, 56th street used to FIRE on big south swells. Big freight train lefts would come in so hollow you could fit a bus inside the barrel. The break used to be another 100 feet out, but in the 70’s, they built the jetties to break up the tidal surge that destroyed the beach during wintertime storms.”
–Marty Groetsch, long-time Newport Beach local

“Where the poo meets the sea is where I surf. There’s something about the smell of shit in the air that I just have a real taste for. My name is Chris and I love river jetties.”
–Chris Champion, Newport Beach local surfer and shaper 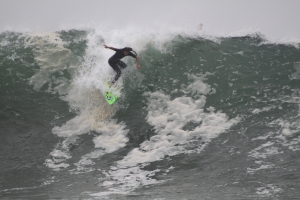 How many fins do you think he’s got on the face? Always a crowd pleaser, Wedge can produce one heart-stopping drop after the next.

Highlights: Barrels for days, brah, crowds are spread out (with exception of Newport Pier and Newport Point), longboard/shortboard/SUP-friendly, bros from the 909, parking sucks (beware of street sweeping days)

Barrels for days, crowds are spread out (with exception of Newport Pier and Newport Point), longboard/shortboard/SUP-friendly, bros from the 909, parking sucks (beware of street sweeping days)