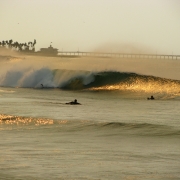 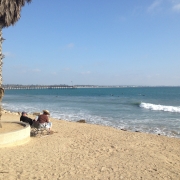 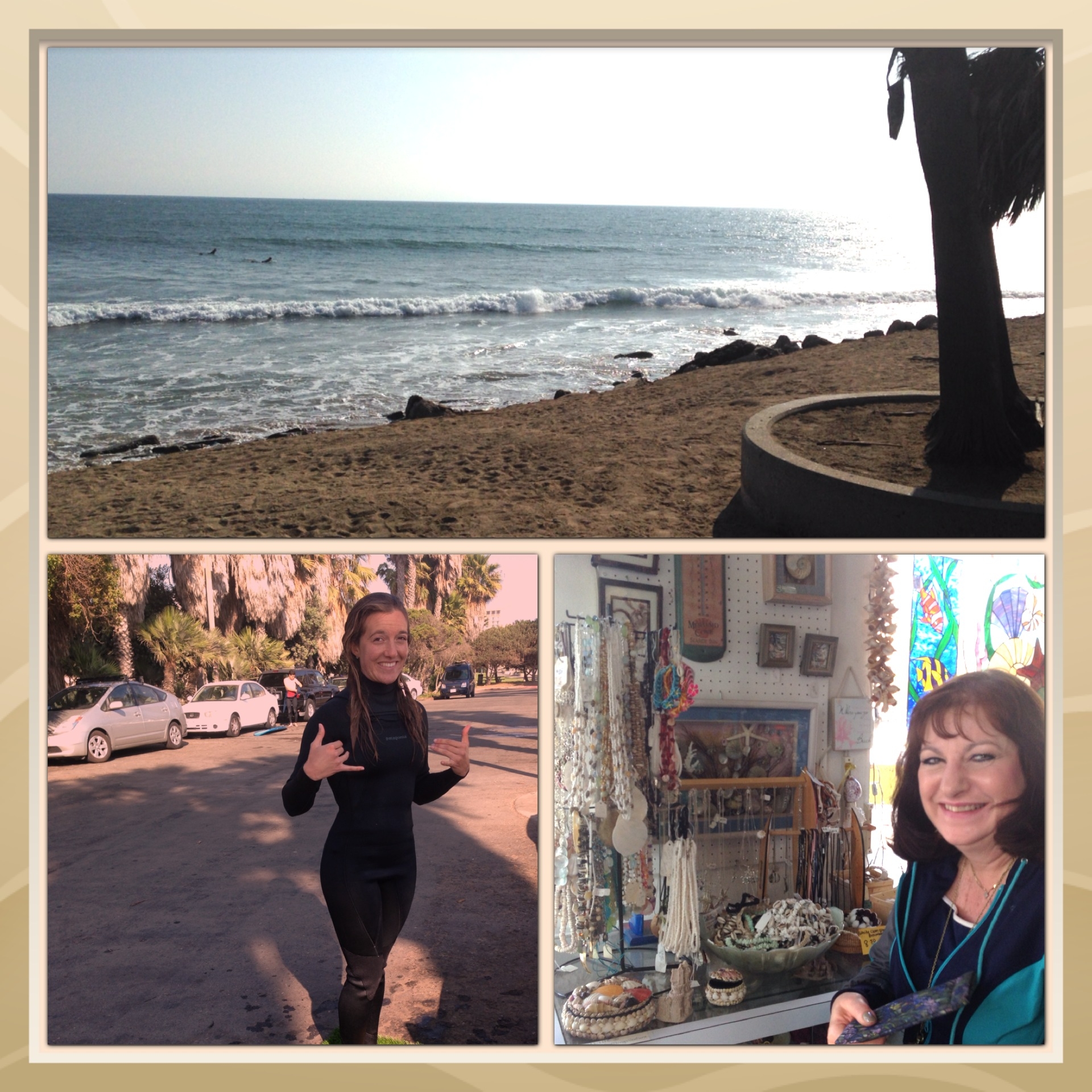 C Street, me and my momma.

October is one of my most favorite months to be a Californian. The weather starts to cool, kids go back to school, offshore winds pick up and swells from all directions linger around our coastline. However, much of this year’s October was spent rushing towards my cousin’s beautiful wedding at the end of the month. Most of my time and energy was spent booking flights, painting signs, decorating bottles, configuring a travel budget, packing, airports, driving…and planning time in between wedding madness to surf, of course.
Fortunate for me, my ingenious cousin picked a gorgeous venue in Nipomo, Calif.…a 15 minute drive to Pismo Beach. It also didn’t hurt that C Street in Ventura was an easy stop on the way up to Pismo, too.
After battling Los Angeles traffic for two hours, I felt it was time to take a pit stop in Ventura with my mom for a bite to eat and perhaps a look around. We stopped and shopped, I introduced my mom to Thai food and any store that read ‘antique’ on the sign, you can guarantee we were rummaging through milk glass, old cameras and horribly cheesy ‘gone surfing’ signs.
The afternoon northwest winds picked up and I decided C Street might still be worth a check. Even though the wind was up, there were still two-to-four-foot rights and lefts coming off the point. I paddled out and much to my surprise, the water temperature didn’t phase me and the people weren’t as grumpy as I thought they might be. Even though I was still technically in southern California, it didn’t feel like it at all. 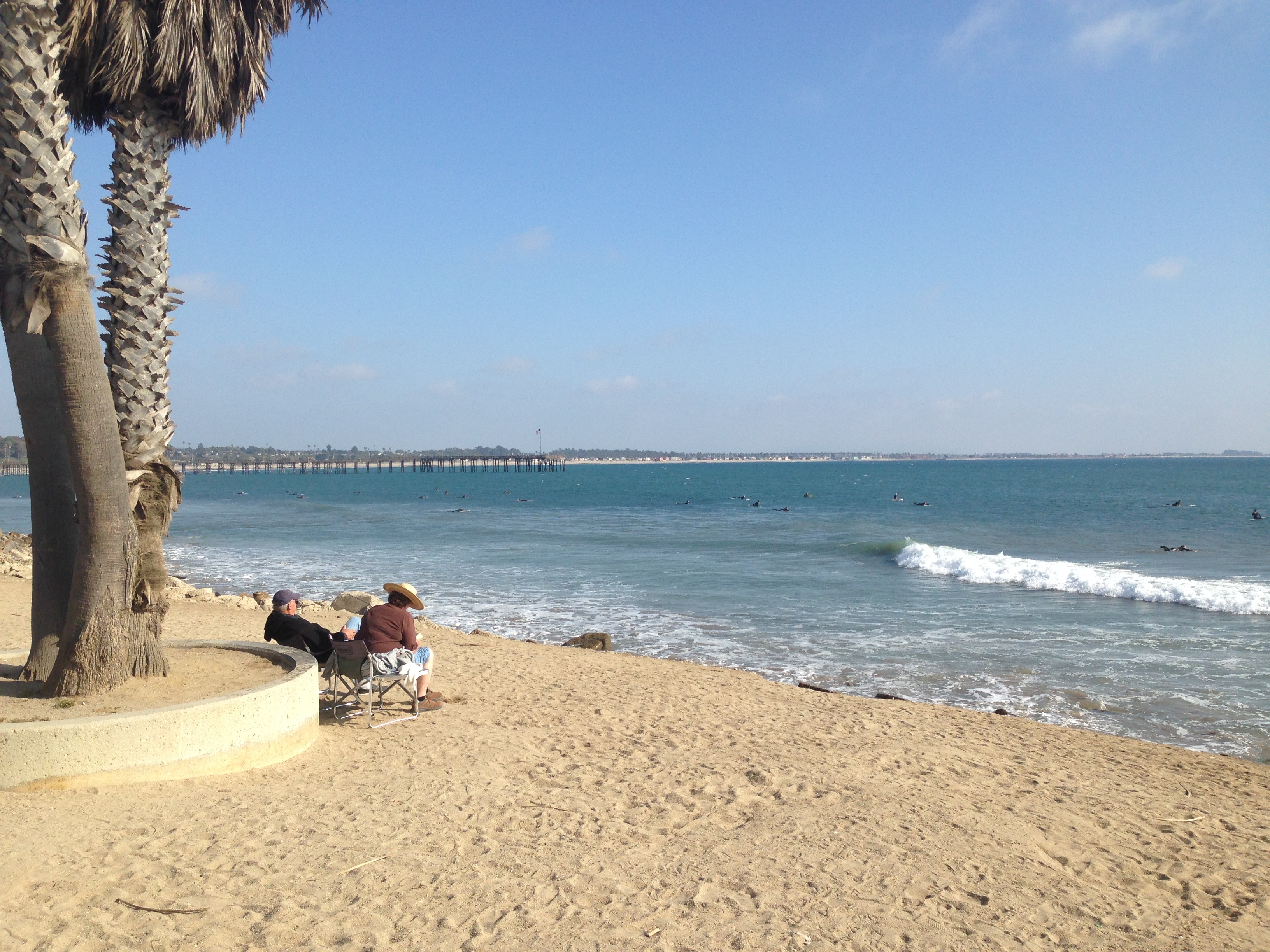 As we made our way through Santa Barbara and arrived at the hotel that was situated across from the Pismo Beach Pier, almost immediately I concluded there will be surfing, come hell or cold water, 60 pound suitcases or google maps constant epic failures. *NOTE: Download the Waze app for maps and whatnot…works way better than Google!*
I was going to do it all…and with a smile.
The next day, I took my time waking up and found myself blurry-eyed in my 3/2 Patagonia wetsuit with surfboard in tow walking across hotel properties towards the pier. Overcast skies met a dark blue/grey ocean and fine brown sand. It was different here…no noise, no traffic, train or obnoxious tourists…just the sound of crashing waves and the occasional family peeling sand dollars and razor clam shells from the sand.
I took this opportunity to breath deep and absorb the peaceful atmosphere…Huge boulder islands sat plainly on the sand and in the water outside of the hotel’s cliffs, boiling with each ebb and flow of the 2 foot swells…I bet that cove can fire on a big swell, I thought.
As I pressed onward to the pier, little two to three foot waves rolled through. There were a lot of longboards in the water…I hope they’re not too aggro, I though as my feet found the silty bottom. I pushed off and began the paddle in the frigid 55 degree water with only my 3/2 between the Pacific and me. 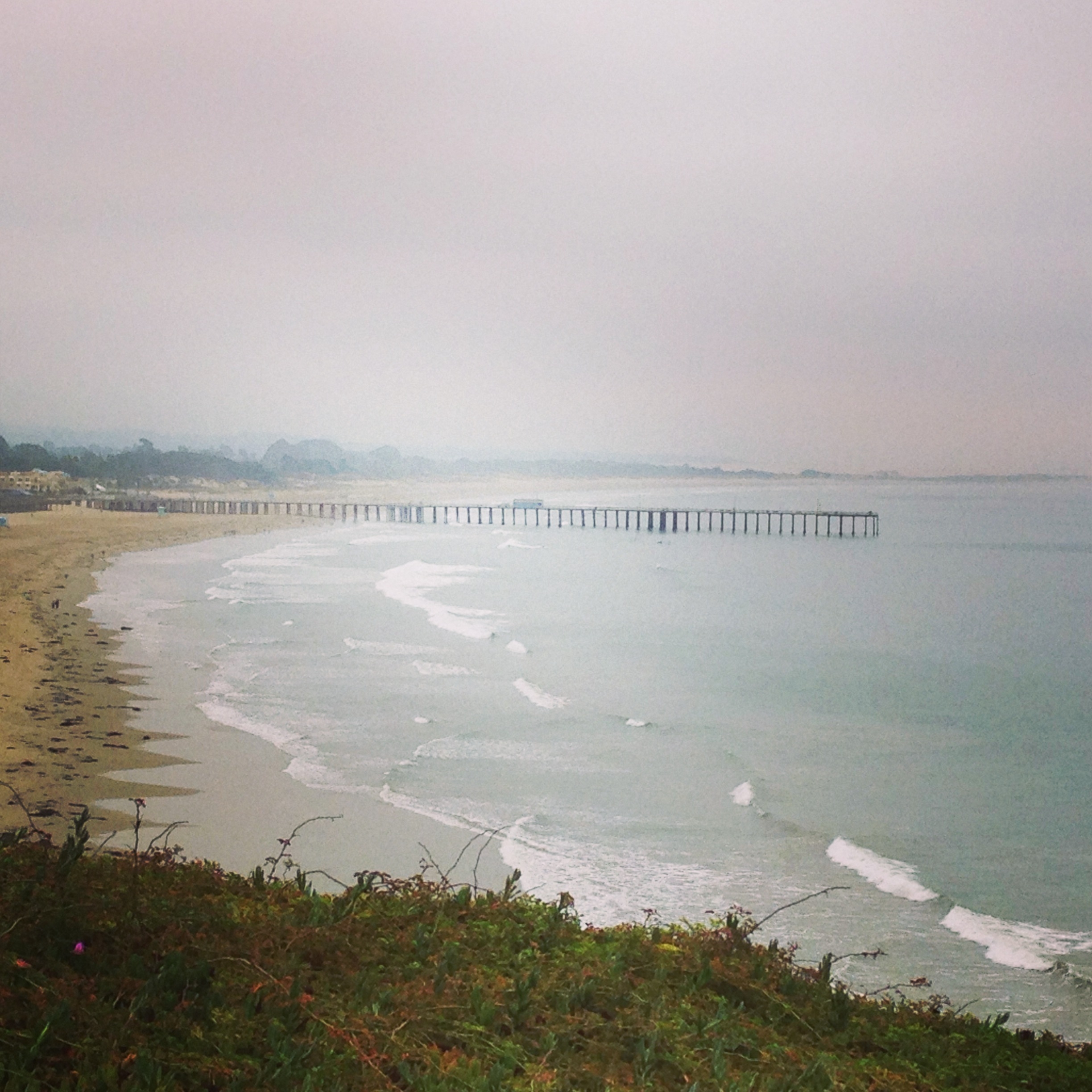 As I sat just outside of the “crowd” of 6 people, I realized they were all college kids from Cal Poly discussing midterms, projects and megalodon theories. Ah please don’t talk about megalodon, I thought. Right before I paddled out, I spotted a large sea lion just inside and thought, that’s a good thing, right? I would be a toothpick for megladon compared to that fatty sea lion. Yep that’s what I will keep telling myself.
But being a toothpick for a toothy creature is not on my to-do list, so I paddled closer to the crowd. Waves came and went and I caught a couple and day-dreamed about scoring overhead  Moro Bay tee-pees, crowd: non-existent.
Suddenly, a gal on a ginormous longboard paddled up and smiled “Hi! How’s it going?”
Non-local status revealed. Boy, that was fast.
The rest of her giggling girl clan paddled around me with one eye on the waves and one on me as I explained where I was from and why I was here.
Among these college girls were marine bio majors, business majors, accounting majors…we talked travel story, sharks (they seem to be a popular topic up here), diving, sand dollars, wipeouts… They couldn’t believe I didn’t have any booties on and told me to try Scuba booties. Scuba booties have a better grip on the bottom and just feel warmer. Noted, gals!
The wave of the day came through and all four ladies were on it together. As I hooted them into the wave, I knew it would break on top of them, but it was too late to warn. They didn’t care as they laughed their way over the falls and through the whitewash.
My hands took on deep purple hues and I knew the time had come to return to wedding madness. We all collected on the beach and they didn’t hesitate to give me a ride back to my hotel. I have a place to stay in Pismo! Yay!
What a good way to start a crazy day!
Although the next morning I stayed with the bridal party and opted not to surf, I heard it was firing. But, as my cousin’s Maid of Honor, I didn’t want to leave her side and the thought of surfing that morning felt unnecessary…besides, between 10 girls and 2 showers, I don’t think it would’ve been fair had I taken up the majority of the hot water to bring my purpled limbs back to life. 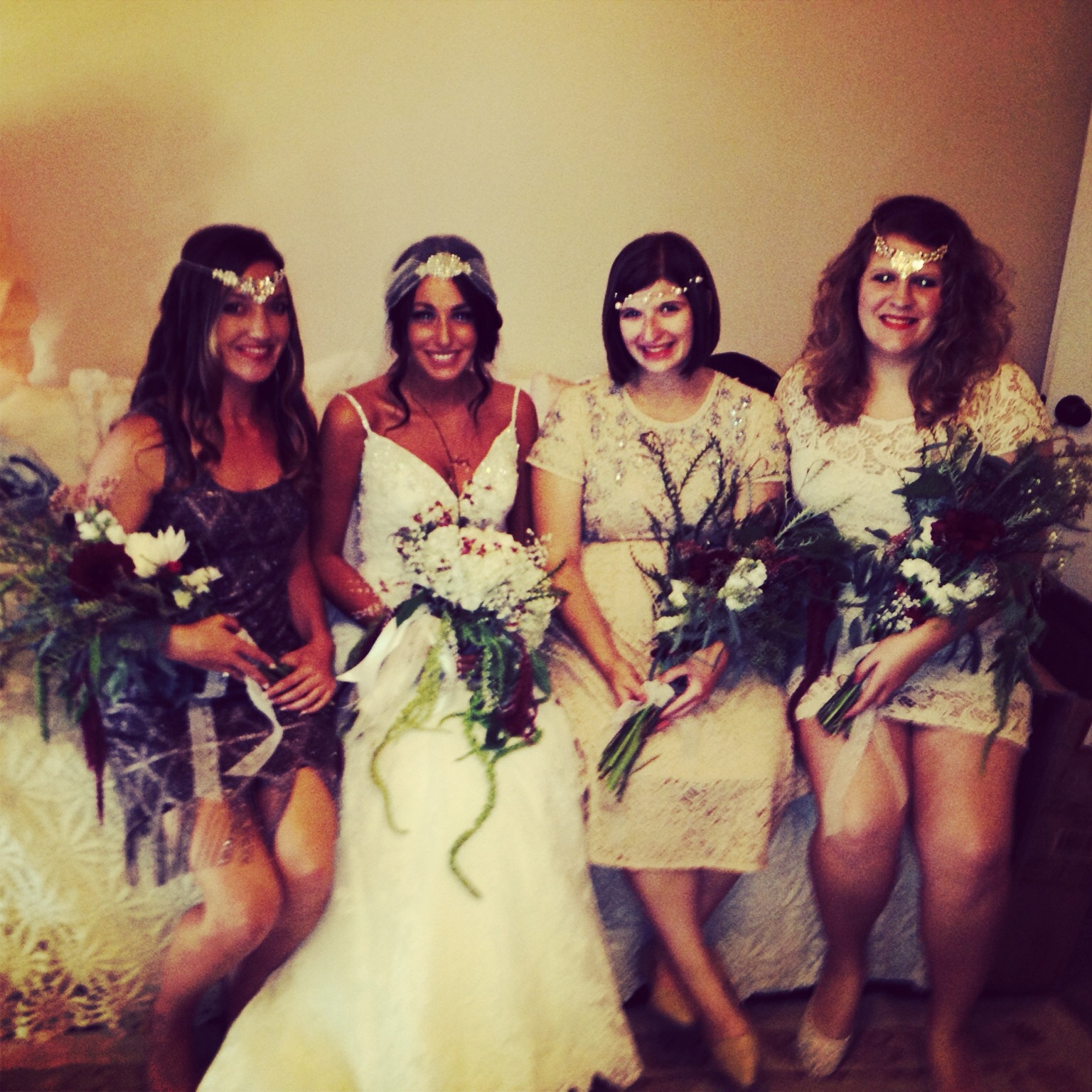 My cousin, Ashley, had a 1920’s theme for her wedding. Pictured are me, Ashley, Kristy and Kerri.

The wedding came and went in a wave of emotion and glory. Speeches were made, dances were danced, cake was cut and rose petals tossed. For a brief moment, I breathed a sign of relief as I watched my happy cousin and her husband drive off into the chilly foggy Nipomo evening.
Ohh fog…maybe the surf will be glassy tomorrow!
Hmm check out is at noon, maybe between breakfast and packing up decor and clothes into two cars….
I paddled out Sunday morning and didn’t see my gals. It was still small, still foggy and still cold, but I didn’t care. Something about surfing in a new place with a lot of swell potential and kind people really made me appreciate my sense of adventure.
Oftentimes, we sequester ourselves to one city, one break, one peak…it isn’t until we venture out of that comfort zone do we learn to appreciate what we have and learn about how we can grow. If there is an opportunity to learn about a new spot, take it! Multitasking is an interesting art who’s end goal is to satisfy all parties. It seems as I grow older, the opportunities to venture out for my own selfish need become less and less.
I guess what I’m trying to say is: When you’ve got the chance, go for it. It might not come again for a long while.
https://confessionsofasurfergirl.com/wp-content/uploads/2013/10/photo-9.jpg 2448 3264 Confessions of a Surfer Girl https://confessionsofasurfergirl.com/wp-content/uploads/2019/08/confessions-logo2.png Confessions of a Surfer Girl2013-10-29 19:33:412013-10-29 19:33:41The Art of Multitasking
Scroll to top