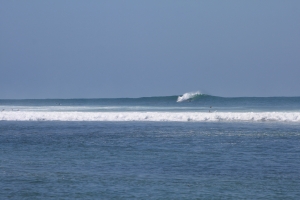 Lowers with some size.

When it comes to Southern California surf, Trestles might be the first spot that comes to mind. Trestles is often preceded by its reputation of perfect and consistent waves that make you feel like Slater-man himself. Waves ranging from the slow and gentle Middles peak to its overshadowing high-performance neighbor, Lowers, are formed by the San Mateo River mouth that empties between Lower Trestles and Upper Trestles. Fast high-performance waves break over a cobblestone bottom in either point break fashion or as a not-so-scary beach break.

Lower Trestles, a.k.a. ‘Lowers’ is one of the most popular (and populated) surf spots on the west coast. This perfect A-frame peak plays host to anyone between the most serious delirious pro down to the old local who doesn’t care who that pro is, drops in at-will and grumbles of how it used to break 30 years ago.

Upper Trestles, it’s not-so-distant neighbor to the north, is a near-perfect right that breaks over a cobblestone bottom on any northwest, west and south swells. When a south swell fires and the Lowers crowd grows to ridiculous proportion, some people move their beach routes to Uppers. This fast wave boasts long rippable walls with an occasional barrel section. 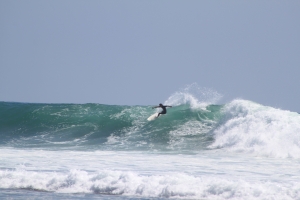 Upper Trestles with some size and mystery ripper.

Cottons, Trestles most northerly point, is a favorite among goofy-footers. Its left-handed walls are one of the few places in south Orange County that can hold a good amount of size. The break will start off mushy over a cobblestone bottom, then bowl over a sandy bottom until you face-plant into dry sand. Watch the sketchy inside shore break.

“Lowers is a world-class wave for high performance surfers. Everyone who is a pro ends up there because it is a long rippable wave. For Uppers, if there is a lot of rain and that rivermouth busts, you’ve got a world class wave there, too.”
–Terry Senate, San Clemente local shaper, 24-7 jokester

“If I had to name a favorite OC spot, I’d have to say Lowers, just because of its consistency and rippability. There are not a lot of waves around here that bend in towards you really well like Lowers does. I think that’s what makes everybody feel like a pro there.”
–Josh Baylock, San Clemente local

Highlights: kelp beds, waves for all boards and skill levels, very crowded lineups, the walk/bike/skate, the street “art,” random pieces of underwear and bums sleeping in the brush

Trestles
Trestles
confessionsofasurfergirl
kelp beds, waves for all boards and skill levels, very crowded lineups, the walk, the street "art," random pieces of underwear and bums sleeping in the brush

kelp beds, waves for all boards and skill levels, very crowded lineups, the walk, the street "art," random pieces of underwear and bums sleeping in the brush